Dhaka, January 20: The small but significant non-aligned South Asian nation of Bangladesh is caught between China and the United States both of whom want a strategic alliance with the country as they spar over superpower status in the region.

The US is worried that its recent tensions with the country could turn into an opportunity for China to come closer to it.

It was a mighty diplomatic challenge the other Week when the newly appointed Chinese foreign minister Qin Gang had an airport layover in Dhaka, the capital of Bangladesh, on way to an African tour.

The newly appointed minister was making an important foreign policy point by making his first stopover in Dhaka. It coincided with the visit of the US National Security Council’s Senior Director for South Asia, Rear Adm. Eileen Laubacher.

Foreign Minister A K Abdul Momen signaled his country’s concern when he told the media: “Bangladesh wants to maintain good relations with both of them. That is a challenging thing.”

Bilateral tensions lately arose between Washington and Dhaka after the US sanctioned an elite Bangladeshi security unit over human rights concerns.

Since December 2021, Dhaka’s relationship with Washington has been fraught after the U.S. declared sanctions on Bangladesh’s elite security force, the Rapid Action Battalion, over alleged human rights violations such as enforced disappearances.

Tensions spilled over into 2022 and the new year as well. Recently, Minister Momen, in the context oif the US calling on Bangladesh to ensure that the upcoming elections be free and fair, commented that his country did not need lessons on democracy from other nations.

“This country was born to establish democracy, human rights and justice. We fought for human rights. Every citizen has these ideals in their veins,” Momen said when asked about recent related comments from the US State Department spokesman.

“We don’t need to be advised by others. Let them look in the mirror,” he added.

When asked if US Rear Admiral Laubacher had discussed Bangladesh’s upcoming general election, but he didn’t give a direct answer. He merely said that the last national polls were free and fair.

“It will be unfortunate if any violence occurs during the elections and it cannot be stopped by outside suggestions. We have to do it,” he said.

The Americans are trying to douse the fires, well aware that stretching things beyond their logical limits could force the hand of Bangladesh to prefer either of the two power.

The US is a key recipient of Bangladesh’s exports, and the latter looks to China to ramp up its infrastructure under Beijing’s Belt and Road Initiative. But the silver lining, so to say, for the US is the tensions Dhaka has with Beijing as well.

In May 2021, the then ambassador of China to Bangladesh said that the relationship between the two countries could be “substantially damaged” if the South Asian country joined any initiative launched by the Washington-led Quad alliance.

The Chinese envoy, Li Jiming, had warned Bangladesh at a meeting organized by the Diplomatic Correspondents Association on May 12, 2021: “Obviously it will not be a good idea for Bangladesh to participate in this small club of four because it will substantially damage our bilateral relationship.”

The Quad, or the Quadrilateral Security Dialogue on the Indo-Pacific region, comprises the United States, Japan, Australia and India.

At that time, Momen called the Chinese envoy’s comments “aggressive.” 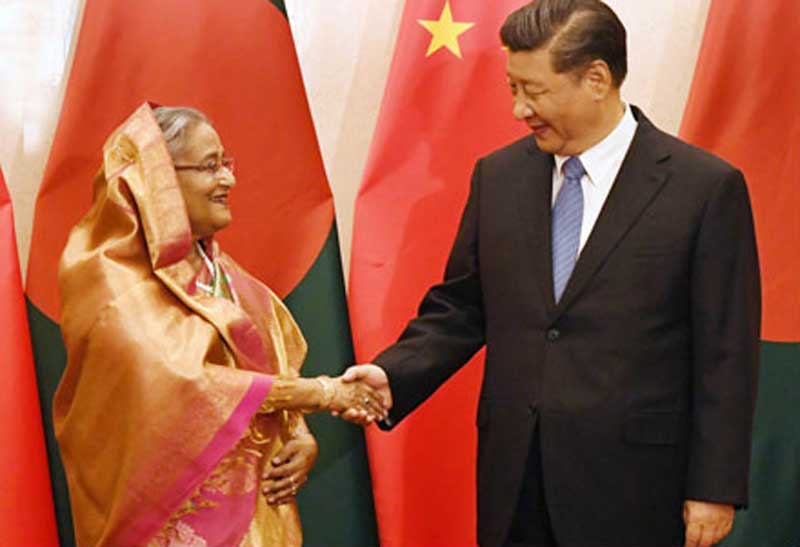 Still, Bangladesh maintains in the One China principle and professes to maintain a balanced foreign policy. IN fact, Momen recently said “we will extend our support (to China) from time to time”.

China does not wish to let go of the opportunity to curry favour with Bangladesh. The visiting Qin Gang appears to have smoothened the ruffled feathers during his brief stopover in Dhaka.

Though he did not go on record, a statement was issued in the wake of his visit. “The two sides spoke highly of the friendship between China and Bangladesh, and agreed to strengthen exchanges in the new year and jointly work for new progress in bilateral relations.”

The Chinese state media reported both sides discussed the following issues: The massive trade deficit between the two countries, the Rohingya issue.

Reports inform that the “Bangladesh Foreign Minister sought special measures from the Chinese side so that the problem could be resolved as soon as possible”, and the Ukraine war and disruptions to supply chains.

The Chinese media reports also said something significant which will not be received well in Washington.

“Momen offered China reassurances about Bangladesh’s neutral stance in the geopolitical competition between Beijing and Washington. ‘We maintain a balanced foreign policy. This is our principle,’ Moment told reporters. He assured Qin that Bangladesh will ‘extend our support to you from time to time’. The United States and China ‘might have their own problems. That is their headache, not ours’, he continued. ‘We want to maintain good relations with both.’ That said, Dhaka seems aware that its friendly ties with all parties in the geopolitical competition opened a window of opportunity for Bangladesh: ‘We are getting much importance,’ as Momen put it.”

Russian ships will arrive in India's Haldia with equipment from Rooppur Thu, Jan 05 2023

India wants to trade in Rupee with Bangladesh Wed, Dec 28 2022

Swedish judge of Pakistani origin wants to be buried in Bangladesh Wed, Dec 14 2022